She tends to show appreciation for her fans, calling them "Potato Flakes," and selects and shows their submitted fan art in her popular series, Dogcraft. She is also a consultant for the Epic Reads YouTube channel, among other professions such as being a writer, Gamer, Milk Aficionado, producer, and photographer. Stacy also takes care of her parents' dog Polly.

Stacy was born on August 23, 1983, and she currently lives in Utah with her pets Molly, Pipsqueak, and Milquetoast. She spent some of her childhood growing up in Germany due to her father being in the military. While living there, she often watched Disney movies. Residing there, she learned to convert time in military hours and considers herself to be a "military brat."[2]

She has also lived in Los Angeles working with various celebrities, companies, and websites including Teen.com, JSYK.com [3], and Cambio.com. While working at Teen.com, she met her best friend Joey Graceffa, and the two eventually started playing Minecraft together. After deciding to move on from Teen.com, she focused mainly on her gaming channel. Because she did not work in Los Angeles anymore, she moved to Salt Lake City, Utah, for the benefit of her dogs. The move also allowed her to travel to conventions more frequently since her parents could now take care of her pets.

One of Stacy's best-known facts is that she loves animals, particularly her six pets, Page, Molly, Polly, Pipsqueak, Milquetoast, and Chica. Page and Molly are Stacy's best-known pets, along with being referenced in Stacy's channel since it's launch in 2013, the two are also the primary subject in Stacy's famous outro.

Page has been portrayed as the more mature dog, along with being Stacy's editor in a Monday Vlog, Stacy has also mentioned that Page is her favorite of her dogs. In 2019, Page was euthanized because of her long battle with Cushing's Disease.

Molly is a Diva, who frustrates Stacy due to her frequently needing medicine, it's also hinted that Molly does not see the point in Minecraft.

Polly is known as Stacy's third dog, with a combined name and appearance of Page and Molly, she is owned by both Stacy and Stacy's dad.

Milquetoast was adopted by Stacy in 2015 and was the first cat. Milquetoast is named after one of Stacy's Dogcraft characters and is popular with fans in terms of Fan Art and video views.

Pipsqueak is her most recent pet. He is very funny and is also named after his character in Dogcraft.

Chica is known as Stacy's fourth dog, she is owned by Stacy's mom and rescued from Puerto Rico.

Each of her pets has their own character in her YouTube series Dogcraft. 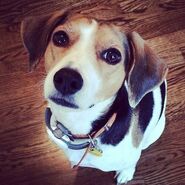 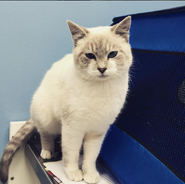 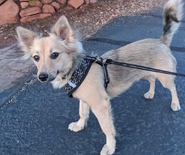 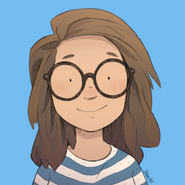 Milk is a white drink rich in fat and protein. The drink has become a popular trademark and icon of Stacy's channel, with Stacy consistently expressing her love of the drink and traditionally carries a bucket of milk in her Minecraft inventory. Despite this, Stacy has expressed interest in switching to drinking plant based alternatives.

The series is heavily based off of Stacy's Dogcraft series and features her and her pack of wolves on their adventures together. The cover is illustrated by Vivienne To. On October 21st, 2017, Stacy announced the release of her first book, titled Wild Rescuers: Guardians of the Taiga. The book went on sale on June 5th, 2018. It is the first book of the Wild Rescuers series.

Stacy's second book in the series, Wild Rescuers: Escape to the Mesa, was relesased on the 9th of April 2019.

The third book in the seires, Wild Rescuers: Expedition on the Tundra, was released on the 3rd of March 2020.

The fourth book, Wild Rescuers: Sentinels in the Deep Ocean, was released on the 2nd of Febuary, 2021.

Stacy created the StacyPlays channel on March 10th, 2013, for the sole purpose of communicating with her and Joey Graceffa's fans, but she eventually decided to upload Minecraft videos to her channel. Due to this, Stacy often refers to herself as an "Accidental Youtuber". The channel recently reached over 2,000,000 subscribers.

Dogcraft is a modded single-player survival series where Stacy rescues dogs and creates many dog-themed builds. Dogcraft is notable for being Stacy's most popular series, and the first episode is the most watched video on her channel. In most episodes of Dogcraft, Stacy breeds a dalmatian puppy and names it after a viewer in hopes of eventually getting 101 dalmatians. Usually, at the beginning of the episode, Stacy goes to her Minecraft Art Gallery and showcases fan art sent from fans.

Cake Quest is a survival series featuring Sqaishey.  They crash landed on a space cake that had been using sheep for sprinkles. The two are on a quest to save the sheep that are in a factory to the north. Aside from the main task of rescuing the sprinkles, Stacy and Squaishey farmed for food and also created most of their resources for tools such as a cobblestone generator and a tree farm.

The Candy Isle is a modded survival series featuring AmyLee33. Both are mermaids in the series which features marine life such as turtles, crabs, and whales. The series also features fairies which can carry out jobs if tamed with sugar.

Bookcraft's first episode was uploaded on Oct 7, 2014. Stacy set off in a fresh, vanilla Minecraft world with a single mission in mind - book themed builds! In this series, Stacy picks out her favorite books and builds scenes using Minecraft materials. The first book she ventured into was The 21 Balloons. After attempting to build many scenes from the book, she eventually decided to work with a build team to speed the book along, and better bring her ideas to life.

The second book chosen was Charlotte's Web, followed by The Hatchet, 101 Dalmatians, and Misty of Chincoteague. On average, there are about 5-7 large builds for each book. Bookcraft is one of Stacy's most difficult series to film, considering the amount of work it takes behind the scenes.

In The Hatchet, for example, Stacy mentioned that the first episode took almost 11 hours to film and edit. Episodes are uploaded on Tuesdays and Fridays according to the weekly schedule, but this has been suspended for the remainder of the summer.

Mineclash is a weekly series Stacy plays with Graser10. Mineclash was originally three-episode series. Occasionally other gamers (e.g StrauberryJam and HeyImBee)are invited, the general aim of the game is to collect multiple objects in survival while being based on movies, popular culture, geography etc. The first person with all the items wins the challenge.

The Monday vlog is Stacy's weekly video blog. She talks about life events, new merchandise, new series, and any changes to her channel that are happening. In 2017, Stacy retitled this series "Milquetoast Mondays".

She is the founder and participant of the UHShe series who was introduced in the first season and also returned for the second, third, fourth, fifth, sixth, seventh, eighth, ninth, tenth and eleventh seasons. She is the only participant who has appeared in all seasons.

She won her first-ever UHShe or any UHC. She won the Season 11 alongside with Banoffee.

StacyVlogs is Stacy's vlogging channel, she mainly posts "follow me around" vlogs to this channel. She also posts gaming-related vlogs to her main channel StacyPlays every Monday.

The channel was originally edited by her friend Andy Rose. In 2016, Andy briefly returned as the editor of the channel.

The channel currently has over 300,000 subscribers. In regards to her vlogging channel, Stacy has said:

"I have a plan for this channel that will probably not take shape until the New Year.. but do not worry. Big things ahead. Thanks for all your support."  [4]

Community content is available under CC-BY-SA unless otherwise noted.
Advertisement